Cryptocurrencies have become incredibly popular today and new tools for trading and working with them appear almost every day. However, there are also projects that have been functioning for several years, having managed to gather their audience and earning a reputation in the crypto market. This article will cover the Bitfinex cryptocurrency exchange, one of such examples. We will find out how to work on it, how to pass verification and how to put money. Let’s look at other issues that are related to interacting with this project and how to get started. 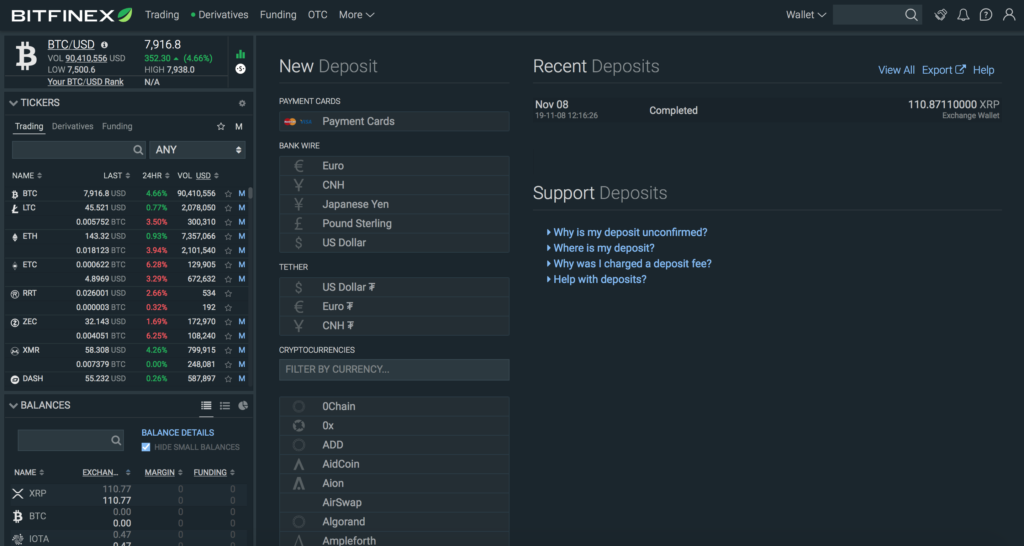 Bitfinex is a company whose exchange for trading cryptocurrencies was registered in Hong Kong. Team members are also known for working with the Tether project (USDT). The platform provides its users with exchange services, there is also margin trading and supports all major types of coins and tokens. The project was launched in the fall of 2012. The developers have correctly approached security issues. This platform is quite worthy of the title of the best cryptocurrency exchange. To work with Fiat currencies, a trader must enable two-factor authentication.

The country of residence of traders and investors does not matter, the crypto exchange strives to be international. The official website has translations into some languages of the world. English, Russian and Chinese are available.

The Russian translation is very high quality, which contributes to the popularity of the platform in the post-Soviet countries. Developers offer an API for webmasters. You can use it to learn the course and work with the account. Its detailed description, usage examples and code can be found on the official website of the exchange.

The creators also took care of supporting mobile platforms. Applications for Android and iOS operating systems are available. They can be found in the official PlayMarket and AppStore stores.

At the end of 2017, an incident occurred during which the project was blocked by Roskomnadzor on the territory of the Russian Federation. Users are faced with the fact that the site does not work and does not open. Most of the ways to bypass the blocking led to a deterioration in the quality of work, because the exchange just slows down when using VPN services. The developers did not provide a mirror and traders from Russia have to choose how to go to the site.

Registration and verification on Bitfinex

To start trading, a trader needs to register a new trading account. Difficulties should not arise, this instruction describes in detail how to register. You do not need to enter any special data in the registration field. You must enter your name, email address, and desired password in the form.

The next step is to confirm the email address using the link that will come in the email. This will open access to your personal account, where you will have access to basic features, such as how to make money.

For full-fledged work and getting the opportunity to both withdraw money and make a Deposit in dollars, you need to pass verification. This will require a number of actions.

The first thing you need to do is fill out a questionnaire with detailed data. It should be noted that only adults can trade on the exchange. Next, you need to provide scans or high-quality images of documents that can confirm the personal data of the user. Documents, by the way, must be translated into English. You must also present a Bank statement from the account from which you will be entering dollars. The last one is a confirmation of the address. To do this, you can present a bill for the use of utilities, but its prescription should not exceed three months.

There are many ways to Deposit and withdraw funds to Bitfinex. The exchange has support for the following cryptocurrencies:

In addition to cryptocurrencies, users can make Bank transfers and withdraw to the card. To do this, go to the withdrawal section. There are no withdrawal limits.

It will be more profitable to use cryptocurrency for replenishment, because in this case no Commission is charged. If you have chosen a Bank transfer, the Commission is at least 0.1%, but not less than 20 USD. Thus, if the amount is small, the trader loses a lot of money.

How to trade on Bitfinex

Bitfinex supports both exchange and margin trading. The first option involves the use of personal funds of the trader, and the second uses leverage. Financing in this case is provided by a special platform. This means that anyone can borrow funds from another trader on the exchange and trade them. It should be noted that in case of sagging rate, the user may lose their money, because the open order will be closed automatically, and the money will be returned to the lender, taking into account all the interest.

The exchange supports various types of orders and all of them are available to traders. They allow you to trade more effectively. Among them there are stop limit, stop loss, stop order, trailing stop.

Limit allows you to buy and sell currency at the selected value or more profitable, if present in the glass.

Market is the easiest solution for beginners and allows you to buy or sell a crypt at the current price on the exchange without unnecessary actions.

The stop order automatically makes a deal when the rate reaches the value level chosen by the trader.

The “One cancels other ” order is both a stop order and a limit order. If one of them is executed, the other will be immediately canceled.

The “Fill or Kill” order is the same limit order, but with a cancellation function if it is not executed within the selected time period.

Bitfinex is one of the largest crypto exchanges and trading volumes sometimes reach a billion dollars per day. The most popular currency pair is BTC\USD. It owns most of the turnover – more than 50%. Immediately followed by EOS\USD and ETH\USD. Each of them accounts for a little more than 10% of the total volume.

The company knows firsthand about the problems with hackers and security, because hackers have repeatedly attempted to hack the service. This has led to the fact that the developers have carefully worked on the security system and continue to Refine it until now. To ensure the reliability of keeping your money on the exchange, it is proposed to follow the implementation of certain measures.

For example, it is better to enable two-factor authentication, use a special phrase to verify transactions, disable the open session function, and restrict access to the session section. Moreover, the exchange has the ability to block an attempt to withdraw funds when entering from a new IP address and requires you to prove that you are not a bot.

All these features have been added to reduce the risk of hacking users ‘ trading accounts. After all, even if the attackers manage to get access to the account, the transfer of funds is so easy to implement still will not work.

It should be noted that there were also cases of DDOS attacks on the exchange. The last successful attack took place at the end of 2017. Technical support then was inundated with letters from users who complained that the exchange does not go and asked to deal with the situation.

In General, according to users on the forums, there are no difficulties in getting technical support, but sometimes you have to wait too long for a response letter.

In conclusion, it should be said that Bitfinex exchange will be an excellent choice for those who are interested only in the most popular cryptocurrencies and the highest possible trading volumes. The project is aimed at professional traders and large investors, as evidenced by the presence of serious financial instruments. On Bitfinex, you can both short and engage in long-term investment. Despite a few incidents in the past, the platform can be safely recommended for use.

At first, experts noticed that the November increase in the price of bitcoin coincided with the mass issue of “cryptodollars” Tether, which was actively promoted by the Bitfinex exchange.

Then a hacker attack was made on the exchange, as a result of which about 30 million USDT (tether tokens) were withdrawn from the accounts.

Later, there was a sensational report ” Paradise Papers”, from which the world learned that the exchange Bitfinex and the company Tether Limited run by the same people. And these people have offshore accounts in the Virgin Islands.

Many experts (including Charles Lee, who created Litecoin) have expressed the opinion that tether tokens do not have economic support. Their developers (and therefore Bitfinex) simply earn on the faith of customers in the value of “cryptodollar”.

As a result, almost all partner banks broke off their cooperation with Bitfinex. In addition, the exchange fell under penalties and lost the right to conduct operations with Fiat money.

The situation was aggravated by the frequent claims of traders. Many users could not withdraw their money from the exchange account. Most often, applications were simply lost “on the way”. But there were also cases when the application was completed on the site, but the users did not receive their money.

In December, the management of Bitfinex announced the temporary termination of registration on the exchange. Representatives of the exchange explained this by the fact that in the current state of the platform can not cope with growing loads and must find a new format.

But in January, registration was resumed. However, with an interesting innovation. Now, to create an account on Bitfinex, you need to immediately put a minimum of $ 10,000 on your exchange account.

According to the owners, this will help weed out small traders and give more opportunities to large players. Curiously, the traders themselves claim that they had enough opportunities for Bitfinex before.

Is it worth working on the Bitfinex cryptocurrency exchange?

What should newcomers or those who already hold assets on the stock exchange do?

Given the ongoing scandals around the Scam with Tether, Bank sanctions imposed on the exchange, as well as the new threshold for registration, experts do not advise now to start an account on Bitfinex.

And it is better for registered users to withdraw their funds from the exchange and wait for the end of the scandalous story.

Despite all the undeniable advantages of Bitfinex (Russian-language interface, wide opportunities for earnings, a large selection of orders, low commissions, and so on), so far it is too risky to work with the exchange.